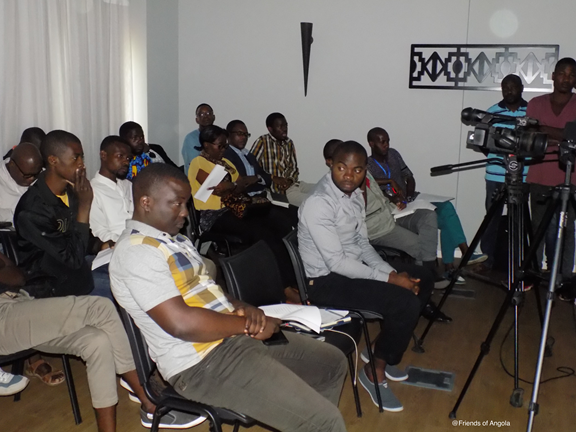 Something amazing is happening in Africa. There is no doubt about that. It’s bigger than the forecasted economic boom and it’s bigger than the return of the African diaspora to the land of their forefathers. Those two being very important and much needed. The tip of the spear, however, is a new breed of freedom fighters that are sprouting everywhere on the continent challenging authoritarianism with pure ideas that seek nothing but progress through liberty.

In case you hadn’t noticed, there is a generation of African people that is not prepared to put up with the status quo of political debauchery that makes a mockery of true freedom and prosperity. We are the generation that was in the womb when the guns of liberation struggles from colonialism cracked their last rounds of ammo. Our fathers and mothers bore the brunt of fighting so that we could be free and proud of our nations. But what we have lived since independence is a far cry from what those brave souls dreamed of when they offered their blood for us to live as free men.

Don’t get me wrong, my generation is grateful that they stood up and demanded to determine their own destiny. It was their duty and they refused to be absent from it. Similarly, my generation, too, has found its duty today. As unfortunate as it is, we are pitted against our own parents. Indeed, our liberators have become our oppressors.

However, they seem to forget the lesson they taught the racial segregator and the denier of their simple right to be recognised as citizens in their country of birth. It is the lesson that people, no matter how weak or the depth or length of punishment, have a flicker of the flame of justice within them that can never be extinguished. The very pregnancies that our parents carried in the trenches and forests – where they spent sleepless nights and hungry days thinking about acquiring freedom – have become the relentless voices on the frontline of the fight against generational tyranny.

On November 18 2018, Zimbabweans from all walks of life did something that even they never thought possible. We marched in our hundreds of thousands demanding change and the departure of Robert Mugabe – the dictator and the butcher of democracy. Ironically it was the same act of mass support and euphoria that ushered him into the place of leadership at independence in 1980. Something shifted in our nation in recent months and it’s happening in the Democratic Republic of Congo, Togo, South Africa, Gambia and many other places. This bold generation of young people is prepared to risk their lives to speak truth to power and stand for their future.

There is no place in Zimbabwe anymore for a dictatorship. What we saw under Robert Mugabe must never be allowed to happen again. Dictators don’t always grow on their own. They are aided by a people’s silence and the dark fear that captures their hearts. Similarly, dictators never go on their own. They have to be forced out by a people’s boldness and the intense ray of hope that pierces the canopy of fear.

What I have learnt in Zimbabwe is that our struggle cannot be subcontracted. We may have many friends and supporters but ultimately the job of delivering freedom and change is ours. Whoever calls himself or herself a friend of Zimbabwe must do whatever they can to amplify and capacitate the voice and the will of the ordinary person. That voice is what we must use to fight for our freedom. We are not prepared to shoot bullets to prove or legitimise our struggle but we must indeed launch a barrage of better ideas for democracy, development and the dignity of everyone of our citizens.

I’m tempted to say that unless we are prepared to be on the frontline in one positive way or another then maybe we don’t deserve the full menu that freedom offers. But then I’m reminded of those who have been so mentally yoked by the oppressor that they can’t even whimper in protest. They, too, deserve what the kitchen of justice is serving up. We don’t want war because we have lost too many of us in wars of the past. We don’t want war because it only works for the oppressor to push us further into bondage and regression. But we must speak up!

Our silence in the face of injustice today means that we seal the fate of our children in the future. They will be born into bondage and think it is normal. But mark my words, like the pregnancies in the trenches, they, too, will rise to condemn us as they seek their own freedom.

In Zimbabwe, our journey has been long but we are more engaged as a people than we have ever been. What we did on that crucial day in November, was not to support a coup but to support our own dream of freedom. What you saw was not people being deceived by the military but people sending a message to both the departed and the remaining that we have it in us to wear you down with our unity and demand our birth right. What price tag do you place on the opportunity for a people who where cowed, scared and unwilling to even say, “I’m hurting” to march en masse to state house holding placards that say, “Mugabe must go”? It’s priceless yet this is the very thing that many, like myself, had been incarcerated for and still many more like the young hero Itai Dzamara remain missing.

We must go into the future fully knowing what our role is. We are to speak up, stand up and show up wherever justice has been held captive. We are to rally, protest and demonstrate whenever the least of us has been violated. That is the unseen victory of Zimbabwe. The fact is that a people who could not speak finally found their voice and that is the undeniable inspiring flame of our own fledgling revolution. Our hope was never in the expectation that our oppressor would one day die but that whilst he lived, we stood up to him. That same hope and irrepressible citizen voice is what must now give would-be dictators of the future nightmares of an impregnable wall of ordinary people defending their dignity. I rest my case.

Evan Mawarire is one of 10 human rights activists who will be speaking at the inaugural Oslo Freedom Forum (#OFFinJoburg) happening on March 26 in Johannesburg. Register to attend or livestream the human rights conference here.

Evan Mawarire is a civil rights activist, pastor, and leader of the #ThisFlag movement in Zimbabwe. Mawarire first gained considerable attention on social media following a video he posted in April 2016 that expressed his frustration with the state of the nation and Robert Mugabe’s government. He encourages peaceful protest and urges people to refuse to pay bribes and stand up for their rights. In July 2016, the #ThisFlag campaign resulted in a mass movement of Zimbabweans shutting down the capital in a series of protests against corruption, poverty, and abuse of office by the Mugabe regime, which eventually led to Mugabe’s ousting. Mawarire was charged with inciting public violence and “attempting to overthrow the government.” The court later threw out the charges and released him. Read more from Evan Mawarire
@PastorEvanLive