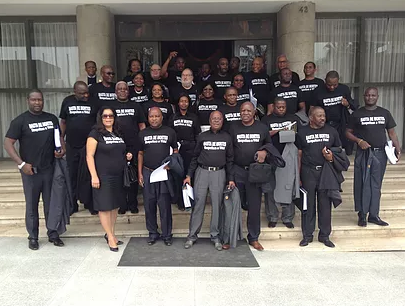 The political parties represented by their leaders, the undersigned, gathered for a matter of urgency, to examine the issue of the violation of human rights in A

ngola, the continued occurrence of arbitrary political arrests, notably in the provinces of Cabinda, Huambo, Luanda and Benguela, resulting mainly from the blatant interference of the holder of the Executive Power, the President Jose Eduardo dos Santos, in the legislative and judicial powers. They decided therefore to issue this joint statement:

1. They find that the clear and undeniable motives that determined the political arrests, be it of the prisoners related to the trial of the 17 defendants (Luanda), of the already condemned Dr. Marcos Mavungo, the case against Arão Tempo and Manuel Biongo, as well as other cases in Cabinda, the Monte Sumi case in Huambo, violate not only the most elementary human rights, but also the fundamental and structural principles of the Democratic States and Rule of law, creating a climate of political and social tensions that are inconvenient for a country that aims to assert itself as a part the concert of nations.

2. They repudiate the mode of action of those entities who have the highest level of responsibility in the country, who hastily and publicly made a decision ridiculously accusing the 17 youth of a coup and attack on the President, intentionally overstating the facts presented against the political prisoners.

3. They deeply regret the biased attitude of the Attorney General, in presenting the supposed “evidence” to the political parties in parliament and to foreign entities, violating the constitutionally enshrined principle of presumption of innocence and the procedural rules.

4. They deplore the fact that access by lawyers to their constituents was hampered and the visits to the prisoners were limited.

5. They note with satisfaction the decisions to suspend initiated hunger strikes, among others, by the political prisoners Luaty Beirão, Nuno Dala, Domingos da Cruz, and Mbanza Hanza, these were strikes aimed at drawing attention to the excessive pre-trial detention of which they were victims, and to actions of torture and inhuman and degrading treatment committed in prisons.

6. They condemn the police repression that befell citizen groups, particularly the mothers of the political prisoners, who legitimately held demonstrations and vigils at places of worship, facts that served to extend the wave of public protests and demonstrations showing their repudiation and that involved a growing solidarity from leading national and international civil society.

7. Based on the facts that have been mentioned, the Political Parties here represented by their Presidents reaffirm their commitment to democratic values and their solidarity with the victims of this wave of repression, calling for the following:

a. That 15 political prisoners be released immediately because it is an illegal imprisonment;
b. That the Constitutional Court considers the “habeas corpus” for illegal arrest, long requested by the lawyers;

d. The Attorney General’s Office exercises its role independently, and in the case that this is impossible, that the holder thereof has the political courage to submit his resignation;

e. That the Courts act with full impartiality and total independence of the holder of Executive power, ensuring fair trials.

f. That, once and for all, acts of torture and of physical and psychological abuse of prisoners are banned and that after establishing the facts, those responsible for such practices are clearly punished.

g. That the President of the Republic, acts in order to safeguard national interests, refrains from using the Intelligence Services, who meddle in judicial affairs.

8. They reaffirm their loyalty to the precepts of the State ruled by Democratic rule of law and their commitment to build a country with citizenship and defense of the right to life.