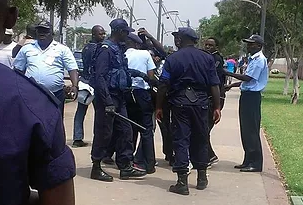 Friends of Angola behold with feelings of profound consternation the use of excessive force by Angolan police to curb an incipient protest movement promoted by youth group.

The following youth protesters are still under police custody:

According to Angolan laws, public demonstrations are explicitly allowed without government permission, which means this particular demonstration fulfilled all legal requirements.

Therefore, Friends of Angola call for the government to refrain from curbing its citizens to exercise their right to freedom of assembly; call for the immediate, unconditional release of those detained human rights defenders.