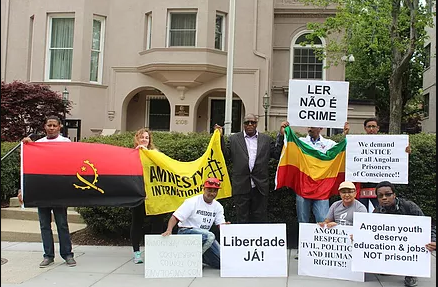 On April 4th, 2016 a Luanda court handed out a hefty sentence to 15+2 innocent young men and women activists including the prominent Angolan rapper Luaty Bairao, whose only guilt was holding a book discussion on Dr. Gene Sharp’s classic book “From Dictatorship to Democracy: A Conceptual Framework for Liberation.”

The “Angolan 15+2,” as they are famously known, were arrested and detained in June 2015 for the simple act of exchanging ideas on nonviolent peaceful resistance.

The charge read “criminal conspiracy,” “plotting against the president,” and ‘planning a coup” against President José Eduardo dos Santos and his government, whose 36 years in power has crept into public-private life adding to distrust and corruption at the intuitional and societal level.
After a dubious judicial proceeding and prosecutorial attempts at portraying the activities as criminal gangs, the court sentenced them to prison terms that ranged from 2 to 8 years, making a mockery of the Angolan constitution while deriding international human rights treaties the country has ratified. (Human Rights Watch, 2016)

Several of the activists had been on hunger strike, including Luaty Bairao who ended up getting five-and-a-half years for “falsifying documents” and the political writer Dominigos Da Cruz and University Professor being given the longest sentence “for leading the criminal association.” (The Guardian, 2016) Another 8 months prison term was handed down to a young activist Francisco Mapanda also known as “Dago Nível Intelecto who shouted that the trial was a farce.

The activists have been wrongly convicted in a deeply politicized trial,” said Deprose Muchena of Amnesty International. “They are the victims of a government determined to intimidate anyone who dares to question its repressive policies.”(Washington Post, 2016)

This is not the first judicial travesty and deliberate violation of Angolan constitutional rights to freedom of press, speech, and assembly perpetrated by the dos Santos government.
In September 2015, the human rights activities Jose Marcos Mavungo was sentenced to six-years in prison after being convicted of leading a protest in the contested region of Cabinda and alleged involvement with an anti-government group.

Following this travesty, on April 5th 2016, the leader of a Christian denomination “The Light of the World” preacher Jose Kalupeteka and its followers were sentenced to 28 years in prison for the killing of nine police officers during a police raid on the group last year, reports Reuters.

Angolan opposition party UNITA claims 1000 deaths among church member during the crackdown on the denomination whose church membership is estimated at 3000 across Angola’s 18 provinces.

As Dos Santos continues to wield uncontested power cracking down on dissidents and opposition groups, Angola is at a crossroads between an economic crisis and political devolution, drifting dangerously to its nightmarish civil war beginning that had torn the country apart just over 26 years ago.

Rampant corruption, dire poverty, environmental degradation, famine, soaring unemployment, youth bulge, as well as the highest child mortality rate has not deterred Jose Eduardo dos Santos from accumulating $20 billion in wealth. Not to mention his daughter Isabel dos Santos becoming the worlds richest African woman with a net worth of over $2 billion.

It is time to put an end to the corrupt judicial system and pro-government justices whose loyalty to the Dos Santo’s government is superseding their oath to uphold the Angolan people’s constitutional rights to exercise freedom of speech, press, and assembly.

Protesters in the Portuguese capital_ Lisbon_ condemn the jailing of 17 Angolan activists by a court in Luanda. Photograph_Joao Relvas_EPA. Source_facebook

Such blatant disregard of Angolan people’s suffering, the economic unraveling, police brutality, and toxicity of the judicio-political system have induced many to either flee the country or face makeshift trials without due process.

This is why we ask all Angolans in the Diaspora including friends, family, and champions of human rights to demand justice for the Angolan 15+2 as well as all other dissidents, whose only crime is exercising their constitutional rights!

Come join us as we protest at the gates of the Angolan Embassy in Washington, DC on Friday April 22nd, 2016 starting 11:00 am to stand up against the injustice and call for the release of the political prisoners in Angola, including Dr. Jose Marcos Mavungo.

Similar protests have taken place in Europe. We need Washingtonians to come out and rally in solidarity to demonstrate to the Angolan people that their voices have echoed loud and clear across the world.

The age of silence and crackdown on freedom of speech, press, and assembly must come to an end. Angolans deserve a second chance and only when we come together in peace and determination can these demands be met.