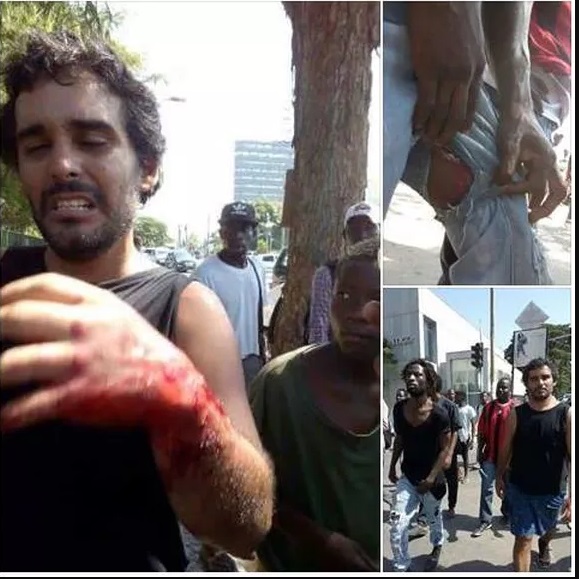 (Johannesburg) – The Angolan government should urgently and impartially investigate police use of force to disperse a peaceful protest in the capital, Luanda. The police beat activists with batons and injured at least four protesters using police dogs.

“The Angolan authorities are responding to peaceful protests with batons and police dogs,” said Daniel Bekele, senior Africa advocacy director at Human Rights Watch. “The government needs to investigate the police crackdown on protesters and hold those responsible to account.”
On February 24, 2017, about 15 people gathered at 2 p.m. in the First of May Square (Largo Primeiro de Maio) to call for the resignation of the territorial administration minister, Bornito de Sousa. He is second on the list of candidates for the ruling Popular Movement for the Liberation of Angola (MPLA) and would become vice president if the MPLA wins the parliamentary elections scheduled for August. Because he is in charge of the voter registration process for the elections, the protesters fear he could manipulate the election.

Witnesses to the protests, as well as several participants, told Human Rights Watch by phone that the protesters were peaceful, and carried no banners or weapons. They were walking toward the square when the police set upon them and started beating them with batons.

Video recorded by a resident in a nearby building shows the police hitting the protesters with batons and using police dogs to disperse the group. The video reveals no aggressive actions by the demonstrators.

Amateur video shows the police striking the protesters with batons and threatening them with dogs, February 24, 2017.

A protest organizer, Luaty Beirao, said he saw about a dozen police officers when he arrived and another group of officers soon emerged with a Rottweiler and two German shepherd dogs on leashes. “We argued with them for a few minutes, before one of the commanders started chasing people away and beating people who had come to watch the situation,” Beirao said.
The police then set the dogs on the protesters. “The Rottweiler bit my left arm, while one of the German shepherds bit the right side of my waist,” Beirao said. “The wound to the waist was not as big as the one to my left arm.”

Beirao provided two photos that are consistent with his account. One photo from the protest shows him with a bloody left arm. The other, taken after the protest, shows him with deep bruising on the back, side, and buttocks, which he said was from baton strikes.

Another activist, Samussuku Chiconda, said police officers beat him with batons and then dragged him into a police van. A photo he provided showed a deep gash on his forehead, which he said required stitches.

“I went to ask the officers why they were stopping us from getting to the square,” Chiconda said. “They threw me to the ground and started kicking me and beating me. I tried to run away, but they chased me and dragged me into the van. I think they wanted to take me to the police station but a police commander told them to release me.”

The police also used force to break up another peaceful protest against de Sousa in Angola’s western Benguela Province on February 24. Two activists in Benguela said that the police briefly detained at least two members of the Revolutionary Movement, an anti-government group, then released the protesters without charges.

Neither the Luanda nor Benguela protests were authorized by the local governments. Three activists who spoke with Human Rights Watch said that they sought permission from the authorities in Luanda, but received no reply. A document from the Benguela provincial government seen by Human Rights Watch contended that the protest could not take place because it was scheduled during the work day and near a school. Such an overbroad basis for denying a protest violates the right to peaceful assembly under international human rights law, Human Rights Watch said.

Among the people injured during the Luanda protest were three members of the group known as “15+2” – a book club inspired by Gene Sharp’s book From Dictatorship to Democracy – whose members were jailed in June 2015 after discussing peaceful protest and democracy at a meeting. A court in Luanda had convicted them in March 2016 for plotting a rebellion against the government and sentenced them to up to eight years in prison. The Supreme Court ordered the group’s conditional release in June, pending a final decision on their appeal. In September, all 17 people were released from prison following parliament’s approval of an amnesty law.

Article 47 of Angola’s Constitution allows citizens to protest without pre-authorization, provided they inform authorities in advance. But the Angolan government has consistently blocked and dispersed peaceful anti-government protests using unnecessary or excessive force and arbitrary arrests.

“Fair elections require respect for freedom of association, expression, and peaceful assembly,” Bekele said. “The police assault on these peaceful protesters sends a chilling message to others who want to criticize the government and is a red flag for the fairness of this year’s elections.”