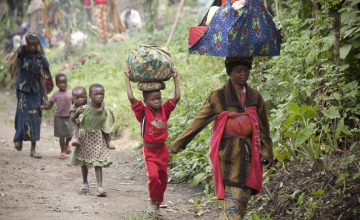 Malanje — At least thirty nine citizens from the Democratic Republic of Congo, including three ladies, were repatriated on Wednesday by the Immigration Authorities (SME), from the Tembo-Alumba border post in Marimba municipality, for their illegal stay in the northern Malanje province.

The afomentioned citizens entered and lived illegally in the province for some time and were detained by the local police authorities for these offences.

In the act of repatriation, SME spokesman, third deputy chief of migration Daniel Diogo Calimina said that the arrest of these individuals resulted from a joint operation between the operative bodies of the Ministry of Interior and the local citizens’ denunciations.

He noted that the province’s migration situation is under control, noting that foreigners enter the Malanje province, mainly from the eastern corridor, namely in the provinces of Lunda Norte and Lunda Sul.

Daniel Diogo said that the local citizens’ denunciations have facilitated the work of the SME in the detention of foreign nationals in illicit condition.

He added that as a monitor of migratory acts, the SME is prepared and has strengthened its ability to cope with migration issues, in order to prevent the illegal entry and stay of foreign citizens.

He appealed to the population, especially the traditional and administrative authorities of the municipalities and communes, for the continuous collaboration in the fight against illegal immigration in the respective areas of jurisdiction.

SME in Malanje has already repatriated from January this year 140 people from the DRC.