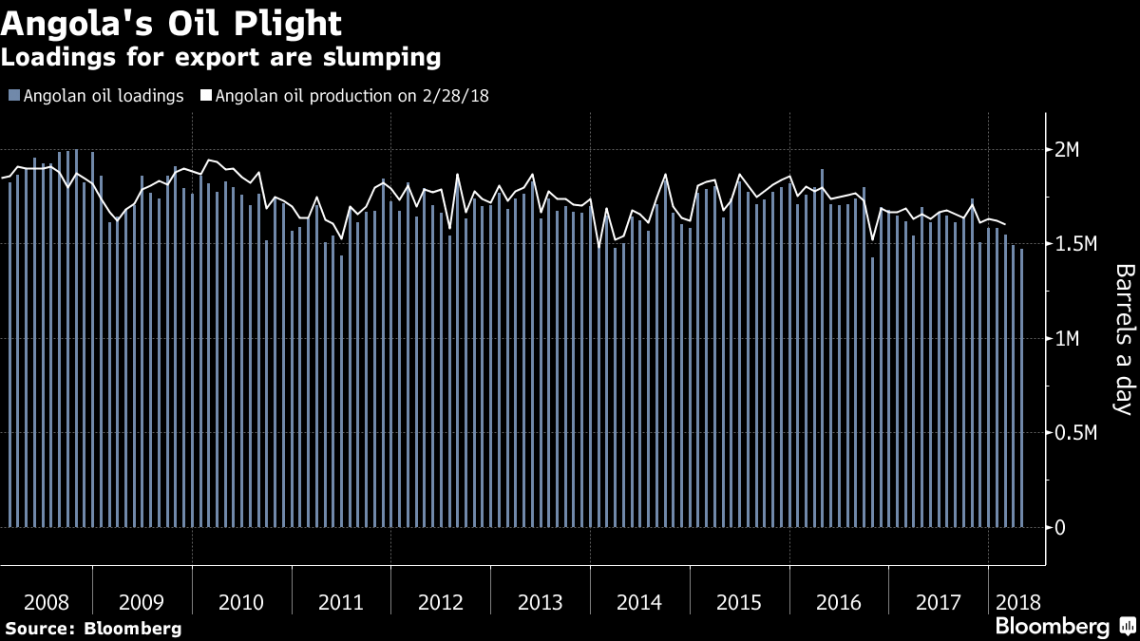 Oil exports from Angola are slumping and the International Energy Agency says aging fields and a lack of interest from foreign investors mean the worst is yet to come.

Shipments from the OPEC state will average 1.52 million barrels a day in the January-April period, the weakest start to a year in terms of outflows since Bloomberg began collating loading monthly programs back in 2008.

The West African country, which exports the vast majority of what it pumps, is struggling to entice foreign investment as some of its older fields start to mature, according to the IEA, an adviser to most of the world’s oil-consuming states. Whether by luck or design, the decline means the country — alongside Venezuela — has been among the most compliant with an OPEC-led drive to cut oil supplies and eradicate a global glut of inventories.

“Angola has been struggling for some time to keep up production and the reduction in its productive capacity is not voluntary,” said Harry Tchilinguirian, head of commodity markets strategy at BNP Paribas SA in London.

Angola has a number of deep-water oil fields that are more expensive to maintain than onshore ones, and their need for “continuous support” is among the reasons behind sliding output since it peaked at 1.9 million barrels a day in 2008, the IEA said in its Oil 2018 report on Monday. The Paris-based agency predicts the nation’s capacity to produce crude will slump to 1.29 million barrels a day in 2023.

New projects from majors including Chevron Corp, Eni SpA and Total SA have provided some additional supply in recent years yet these have been offset by sliding output at mature fields including grades such as Kissanje, Nemba and Pazflor. Of these Pazflor is the most marked decline falling from average shipments of about 215,000 barrels a day in 2013 to 107,000 barrels a day in the last two years.

The declines in production from Angola are a boost for OPEC as it seeks to keep production curbed in order to maintain stable prices. Output from the group’s 14 members was about 32.4 million barrels day in February, according to consultants JBC Energy GmbH, with compliance among the 12 countries who have agreed to cuts still “very high” at 137 percent.

Angola has agreed to keep output at 1.673 million barrels a day or lower throughout 2018. So far the country has proven to be OPEC’s second-most compliant member, according to data compiled by Bloomberg. Only Venezuela, which is beset by an economic and political crisis, has cut by more since the curbs were introduced.

— With assistance by Alex Longley