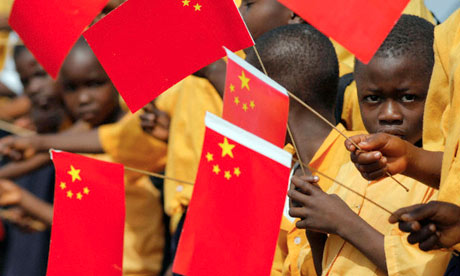 The Angolan newspaper Expansão had an intriguing front page cover this week. It declared, “Every Angolan owes $745 to China.” It also listed debt to other countries, but debt to China was more than seven times what’s owed to the next creditor, Israel. By some estimates Angola owes some $25 billion to China. Since resuming ties in 1983, Angola has taken $60 billion from China in loans and investments.

The issue for Angola isn’t just that it’s borrowing a lot from China, it’s also the nature of the debt. As Africa’s second largest oil producer, Angola’s agreement with China is such that it uses oil to pay off the debt rather than selling on the open market and generating cash. This is all well and good when oil is $100. But it’s risky when oil prices fall. It has caused a liquidity crisis in the recent past, as well as spikes in inflation.

Meanwhile, as of the end of the first quarter, about 55% of Kenya’s external debt was to China. A remarkable share to be owed to a single country versus a multilateral agency like the World Bank. This comes as Kenya became the latest African nation to join the China-led Asian Infrastructure Investment Bank. The growing interest in the multilateral financial institution in Africa points to China’s emergence as a favored lender, rivaling the World Bank.

Some Kenyans are not happy about the trade imbalance with China. “Poor strategy dug Kenya into Chinese trade hole,” was the headline for an op-ed in Kenya’s Standard newspaper this week. The concern is Uhuru Kenyatta’s government and others before had been naive in their lopsided dealings with the Chinese, despite infrastructure construction and other benefits. “Many African leaders have also been endeared to China by the latter’s deep pockets, most of whom have grown wary of lectures from their traditional donors from the West. China’s cash comes with no strings attached.”

Much of the discussion around China’s role in Africa is often in the context of Africa as some sort of “neocolonial grass” in a battle between the elephants of United States and China. One of those two countries has to be “winning” or “losing” in Africa while Africans are bystanders. As I argued this week on CGTN’s The Heat show, we need to put more of the focus on the role of African leaders and policymakers and look closer at the types of arrangements or agreements they make with Chinese partners.

Many African nations may be very keen, even desperate, for a willing partner to fund infrastructure and much more. But to do so without guarantees or clauses that encourage or even demand job creation, knowledge transfer, and technology transfer is short-sighted. It shouldn’t matter where that partner comes from.