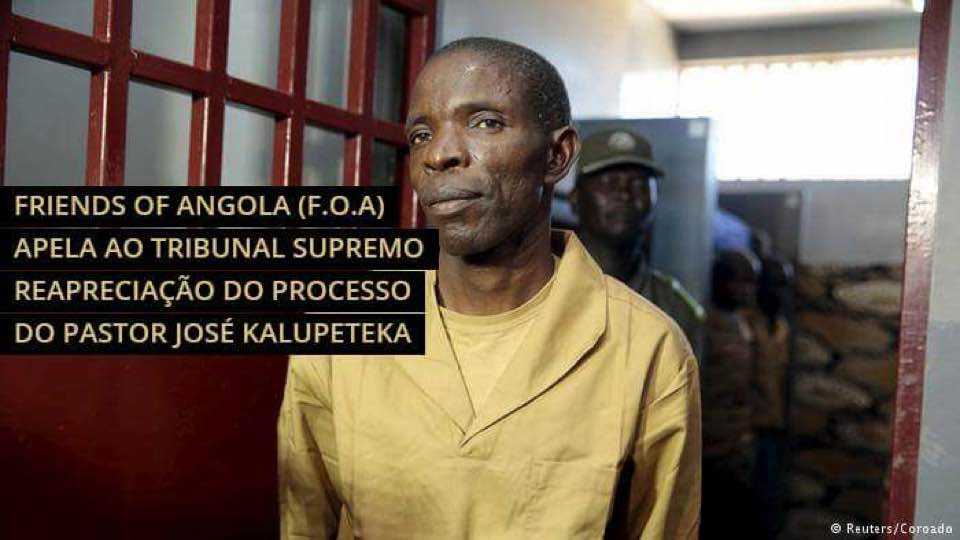 ﻿Freedom of Religion in Angola

Washington D.C – Friends of Angola (FOA) hereby appeals to the Supreme Court (TS) to review the case of the José Julino Kalupeteka. This is because first, any appeal of this case rests with this court and second, there is evidence that fundamental principles of the criminal procedural code were not scrupulously observed.

According to Simon Allison, a journalist working for the Daily Maverick, “on the anniversary of its bloodiest day [27 May 1977], Angola is reeling from yet another massacre of civilians by the state. The government would like to the world to forget what happened on Mount Sumi on 16 April this year [2015], just as it covered up for decades the tens of thousands who died on 27 May 1977, and those slaughtered in the Halloween Massacre in 1992. This time, however, information isn’t quite so easy to control – and nor are the consequences.

“Mr. Kalupeteka is a pastor and a gospel singer, and the charismatic leader of an offshoot of the Seventh Day Adventist Church, known as A Luz do Mondo, Light of the World. He’s also a thorn in the side of the Angolan government. It doesn’t quite know what to make of him or his followers, who don’t fit neatly into any of Angola’s traditional power structures; and who, increasingly, were resisting the dictates of the state, albeit mildly (for instance, Kalupeteka refused to allow census officials into Mount Sumi last year),” noted Simon Allison.

In one of the most mediated and controversial trials in Angola, the Huambo provincial court sentenced him to 28 years in prison. The defense appealed the decision, but two years later, the Supreme Court has not yet ruled. Zola Bambi, one of Kalupeteka’s defense lawyers, considers this silence unusual, but not strange, as it is yet another example of the partial way in which the trial was conducted.

Adilson Salvado also said that the judge of the case described the defendants as habitual delinquents and by tendency. This qualification is not suitable for Kalupeteka and his peers. For the issue of delinquents by tendency is that there must be an intentional crime that corresponds to the greater penalty and that their behavior reveals wickedness, perversion and that makes these defendants seriously dangerous,” he emphasizes. According to sociologist Carlos Conceição, “the sentence claims that the State body responsible for legalizing the Churches was not called to testify in court.”

Maka Angola in an article on April 21, 2016 entitled “Diary of a Survivor of the Mount Sumi Massacre” describes the tragic incident of when 25-year-old Raul Xavier, who was among the first to rescue his leader, José Julino Kalupeteka, while hidden in the ceiling of the house of Kalupeteka, ended up with a bullet in his right ankle while witnessing the massacre of Mount Sumi. Unfortunately, Raul Xavier’s testimony was not considered in the final decision of the trial?

Deutsche Welle in its March 4, 2018 publication entitled “Angola: Kalupeteka waited two years ago for the Supreme’s response”, reads as follows: “On 5 April 2016, José Julino Kalupeteka, leader of the sect” The Light of World, “was found guilty of the murder of nine National Police officers.

In addition to the interest of FOA in this matter, in the name of truth, justice and human dignity, we invite journalists, academics interested or specializing in matter, religious communities, nongovernmental organizations (NGOs), society in General, to address the subject of full, impartial manner and good faith.

The procedural steps of the Huambo Provincial Court applied to believers of the Church of seventh-day Adventists “light of the world”-raise serious doubts about the impartiality of the legal and political authorities.

This modus operandi will have served an immediate political purpose, but in the long run it will certainly have dire consequences for our weak society.
In the interest of freedom of religion, conscience and freedom of expression, our society has a moral and civic obligation to question the legal framework applied in this trial.