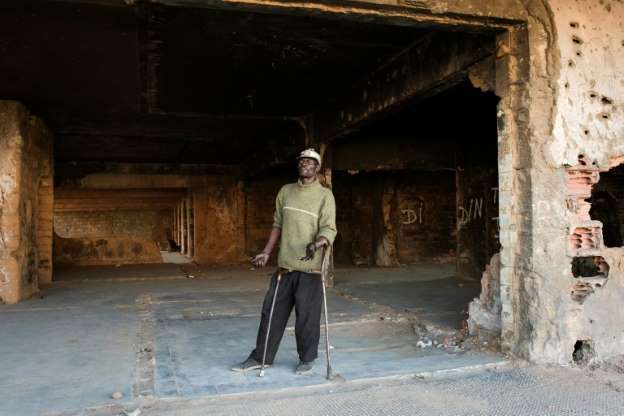 “I was defending this area during the war,” Domingo Seiala explains hunched over his rusted crutches – a constant reminder of the injuries he sustained during the Angolan civil war.

The bloody post-colonial conflict lasted from 1975 to 2002, pitting the ruling MPLA against Unita rebels.

Seiala, a veteran of the MPLA armed wing, now lives in a collapsed and abandoned high school still riddled with bullet marks from the war.

Disabled and without any state assistance, former soldiers like Seiala find themselves destitute in the city of Kuito, which was the Unita headquarters and the site of some of the fiercest fighting during the 27-year long war.

Angola has about 159 000 war veterans according to the veterans ministry, but only a small percentage receive a pension of 23 000 kwanzas (60 euros, $67) per month.

“The war is over, we are at peace, but there are a lot of things we don’t have, like money to buy food to eat,” says Seiala.

The 49-year-old stepped on an landmine, suffering foot and leg injuries in the war between the Cuba-backed MPLA and the US-backed Unita which left more than 500 000 dead and many more maimed.

“After the war finished we were left injured, and now we are without support. Now we are like this (disabled)… The government is failing us… There are many things missing in our lives,” said Seiala, donning a torn and faded camouflage military cap.

Domingo Tomas, also an MPLA veteran, lost his right leg in the war.

He lives in the same wrecked building as Seiala, and the pair try and make do with what they have.

“My whole family died in the war,” Tomas says.

Further down the street is the abandoned house of Jonas Savimbi, the Unita leader killed in battle in 2002.

Recently exhumed, his remains received a formal burial in June in his hometown of Loipitanga, two hours away from Kuito.

The government has introduced a bill to nearly double pensions to 42 000 kwanza, provide free transport and access to schools and hospitals.

“There is no support. We are waiting for God to do something,” he said.