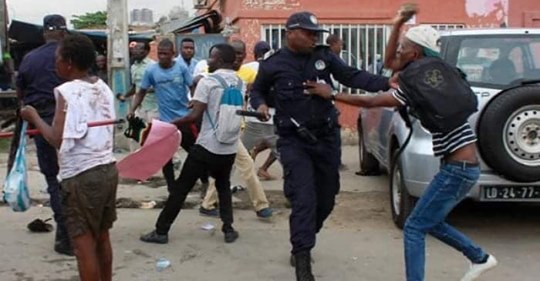 Friends of Angola once again condemns the continuing repression of young people who were detained in an attempt to rally in Kalandula, Malanje province. The repression was carried out again by the National Police, an institution whose duty is to protect the demonstrators.

Friends of Angola (FoA) remains concerned about the wave of repression against young demonstrators who use this medium as a way to present their dissatisfaction with unacceptable social situations that have large negative impact on their lives.

In less than two weeks, three recorded actions of brutality against citizens who were exercising a constitutionally guaranteed right has been noted, which puts the Angolan authorities in a negative position in respect to the protection of human rights in Angola.

The last of the three police actions was the 27th of October of this year, where the National Police in the municipality of Kalandula Malange province, arrested a number of Hermegildo citizens namely José Vitor Vieira Moses and Felix Francisco Muondo who were to organize a demonstration which aimed to protest against poor governance in the municipality.

The authorities then transferred them on 28 to the city of Cacuso where they are still awaiting a summary trial at the Court of that county.

Friends of Angola contacted the Commander of Kalandula Police, Mr. Santiago Ribeiro who confirmed the arrest, and that they were transferred to the municipality of Cacuso. The information received through sources close to the detainees indicate that these young people have been victims of physical assaults after their arrest.

Friends of Angola urges law enforcement authorities, in particular the Commander of Cacuso Police, to treat these young individuals in accordance to national and international human rights standards, and also asks for their urgent release because it is their right to demonstrate peacefully.

To demonstration is enshrined in the Constitution of the Republic of Angola (CRA, Article 47) as a guarantee for all citizens, and without the need for any authorization request.

We recall that Angola is a member of the United Nations, African Union and other international institutions, so has added responsibilities in respect for human rights.

Note that the National Police, for these cases should always be called to ensure the safety, and the protection of participants during the course of their peaceful protests, and safeguarding compliance within legal limits on exercising the right to demonstrate, and most importantly, prevent any external acts that violate their democratic and constitutional right as citizens interested in demonstrating.

Finally, to curb these violent actions from repeating and spilling over into something much worse, FoA asks for accountability against those involved in brutality from the appropriate authorities.