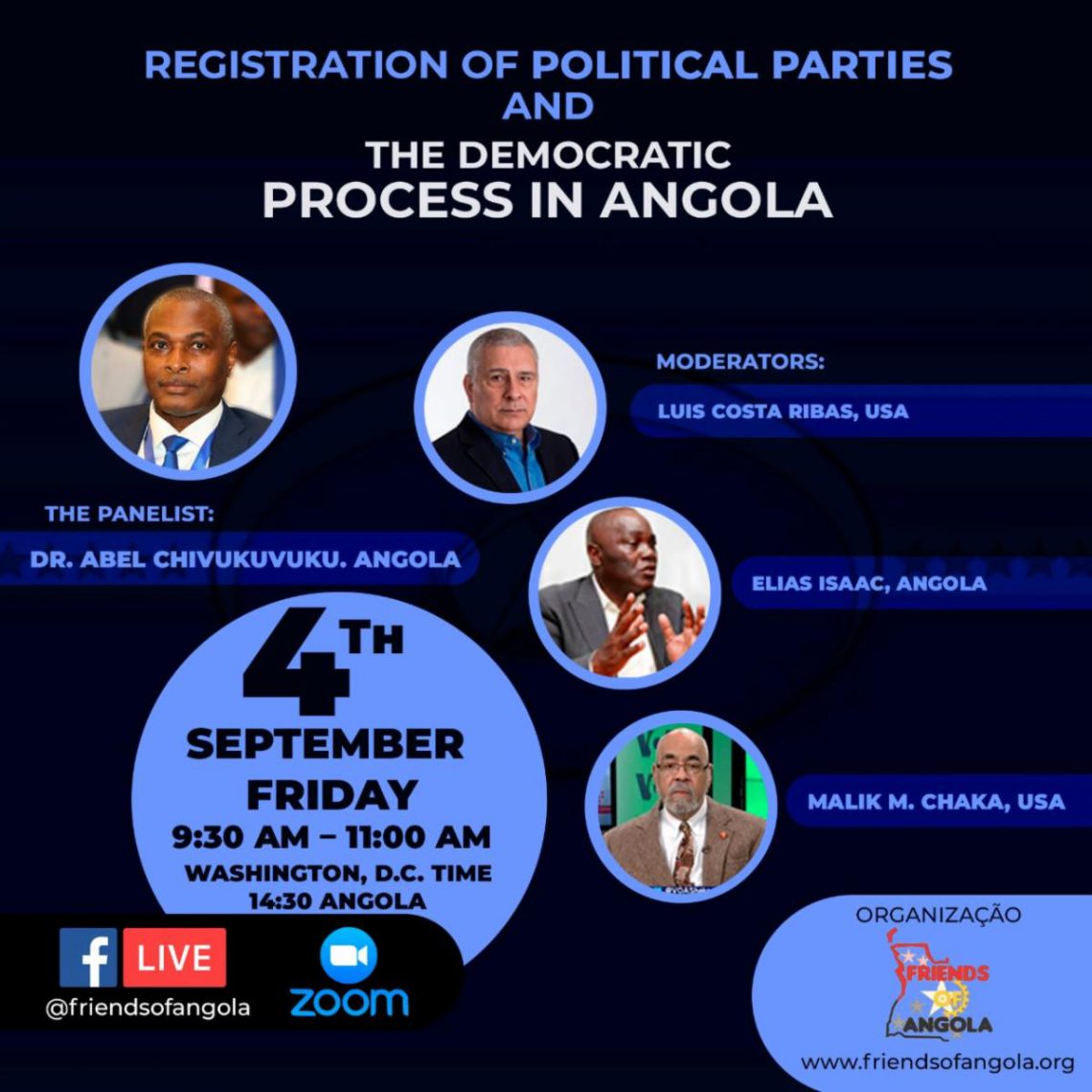 This event will also be streamed live on Facebook of Friends of Angola: @friendsofangola

About this event:
This “virtual round table”, aims to address the democratic process and the procedures for legalizing political parties in Angola.

Luis Costa Ribas , based in Boston, USA, is an award winning journalist, new media editor, and television correspondent with 37 years’ experience in the U.S. and abroad. Luis is a skilled communicator with the ability to break down complex ideas into simple concepts for a wide range of audiences. Equipped with a rich international background he’s worked on a wide variety of subjects and stories from conflict to politics, to humanitarian issues and natural disasters. He’s traveled to more than 50 countries, including Angola and is fluent in English, Portuguese, and intermediate Spanish. Luis visits regularly Angola since 1992 and lived in Angola from 2013 to 2016.

Abel Epalanga Chivukuvuku is the leader of the PRA-JA Servir Angola political project, Mr. Chivukuvuku is the guest of the “virtual round table”, hosted by Friends of Angola a human rights advocacy non-governmental organization, to address the procedures of legalizing political parties in Angola, in particular his party, as well as his vision of democracy in Angola.

Elias Mateus Isaac is ordained minister for 33 years and active political activist for 30 years. Experience in humanitarian and relief work and management of development programmes in the areas of democracy, governance, rule of law, human rights and anti-corruption work in Angola. He was the Angola Country Director for the Open Society Initiative for Southern Africa (OSISA) from 2005 to 2018 with the overall responsibility of providing strategic management and programmatic leadership; From 1999 to 2005 worked for the United States Agency for International Development (USAID) as Senior Democracy and Governance Specialist serving as the main expert resource person in the areas democracy and political party, civil society and media development, rule of law, governance and anti-corruption. He also worked as the Deputy-Country Director for Programs for the Mississippi Consortium for International Development (MCID) in the Angola country office (1998-1999) as well as Program Officer for the International Republican Institute (IRI) program in Angola (1997-1998). He worked as the Director for Administration in the Department of Humanitarian Assistance, social Studies and Projects of the Evangelical Congregational Church (1991-1994)

Malik M. Chaka is a retired U.S. Government official who served as Director, Threshold Programs, for the Millennium Challenge Corporation and as a Professional Staff Member with House Africa Subcommittee. He first visited the Angola marquis as a journalist in 1973 prior to independence on November 11, 1975 and travelled widely in the country over a four decade period. Mr. Chaka has written on Angola on the Times of Zambia, Zambia Daily Mail, and London-based Africa Analysis. He testified before Congress on the Angolan Government of National Unity. Mr. Chaka served as the Director of Communications for the Free Angolan Information Service for seven years, and produced and edited Angola Update and Angola Economic Notes, two internationally distributed newsletters. He was a member of a Council on Foreign Relations independent commission that issued Toward An Angola Strategy: Prioritizing U.S.-Angola Relations in 2007.