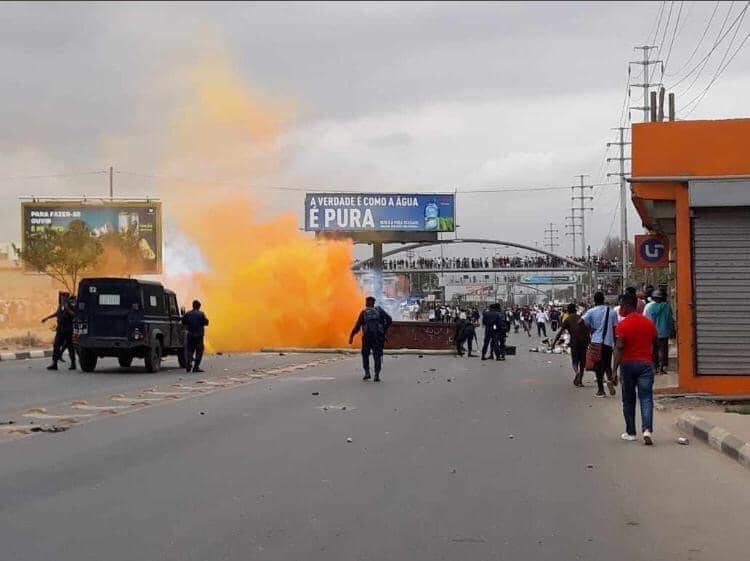 It is with great concern that Friends of Angola (FoA) became aware of the aggression carried out on October 24, against a group of peaceful citizens demonstrating over unemployment, free and fair elections, and corruption in Angola. We ask President Lourenco to free all the protesters who were illegally detained during the protest on October 24 in Luanda.

According to witnesses present at the scene, police personnel not only acted brutally against the protesters, but they also used tear gas, horses and police vehicles to intimidate and disperse the peaceful protest. Witnesses also claim that Angolan authorities refused to provide medical assistance to the protesters who were abused by police officers.

The reasons that led the local civil society to demonstrate in the first place is due to the lack of employment opportunities, the endemic corruption that continues to cost millions of dollars from Angolan public funds and a lack of an independent electoral commission. Friends of Angola’s concern is based, among others, on facts that violate the law, especially when Angolan authorities believe that peaceful demonstrations should be authorized – that is seek approval – which in fact contradicts the Angolan Constitution.

Angola, in addition to having ratified International Treaties, cautioned in its Constitution that all constitutional and legal precepts regarding fundamental rights must be interpreted and integrated in harmony with the UDHR, the African Charter on Human and Peoples’ Rights and the Treaties International (art. 26, no. 2, CRA). Freedom of assembly and demonstration is embodied in the Constitution of the Republic of Angola (CRA) in its article 47. Peacefully and without weapons, as stated in paragraph 1 of the article, the participants in the demonstration appeared only with posters, properly protected with face masks and respecting the physical distance required in the context of combating the COVID-19 pandemic.

Thus, Friends of Angola believes that every citizen, national or foreign, should be treated with dignity and respect when demanding a right. We believe that each case must be assessed in strict compliance with the International Conventions to which Angola is a party to. For this reason, we call on the Government of Angola and in particular, the provincial commander of the Luanda police, Eduardo Cerqueira, and the governor of Luanda, Joana Lina Ramos Baptista Cândido, to be educated about the laws of the land, as well as uphold their work in full commitment to the people, regardless of the circumstance, so that their rights are respected.

We also call for the immediate investigation and release of the illegal detention of several arrested citizens. As it is clear that the demonstration is in accordance with what is stipulated in the CRA, FoA demands from the Angolan authorities to open an investigation with the aim of bringing those responsible for the aggression to justice with respect to universally recognized Human Rights, such as the right to integrity, physical and freedom of expression. These rights are clearly started in the CRA and in the Universal Declaration of Human Rights ratified by Angola but meanwhile are being violated by authorities who, by legal imperative, should be the first to respect them.

We also hope that President Lourenco will embrace democratic values by respecting freedom of assembly and expression of Angolan citizens.