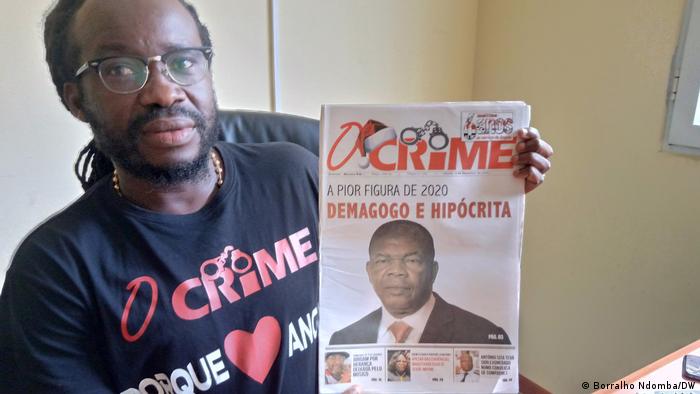 According to Voz of America, Angolan journalist Mariano Brás, director of the newspaper O Crime, was accused in a process of defamation, insult and outrage to the symbols and organs of the State, filed by the Attorney General’s Office (PGR) following a matter that elects the President João Lourenço as “the worst figure” of the year 2020.

A few months ago, in the first interrogation, Brás was at the Criminal Investigation Service (SIC) as a deponent, but now, with the indictment already formalized, the scenario has changed.

It was as a defendant that the co-founder of the only publication that deals exclusively with crime was on Monday, 23, at the Department for Combating Organized Crime, accompanied by his lawyer, Salvador Freire.

In an editorial, O Crime elected João Lourenço as the “worst figure of the year” given the electoral promises of 2017 and the current social and economic reality of the country.

The journalist says he is calm, given that, as he emphasizes, the legal system does not provide for punishment for those who assess the performance of the Head of State.

“We elected the President of the Republic as the worst figure in 2020 and, based on this matter, they filed a lawsuit. We (with a lawyer included) believe that there was no crime, only an evaluation of the President’s work and we concluded that it was negative”, stresses Brás.

He argues that “we had a lot of promises, like 500,000 jobs or the transformation of Benguela into California, but what you see is total chaos.”

Contacted by VOA, the PGR spokesperson, Álvaro João, said he was not aware of Mariano Brás’ condition, but promised to make a statement at any time.

In reaction to lawsuits being launched against journalists in recent times, some professional associations, with the Union of Angolan Journalists at the head, have warned of a growing number of cases of this kind due to the political moment, not ruling out what they call persecution. to professionals in the field.

A source from the PGR emphasizes that the intervention of the legality supervisory body is more focused on cases related to offenses against national symbols and sovereign bodies, becoming public in nature, explaining that, in matters of libel and defamation, the legitimacy remains with the offended.