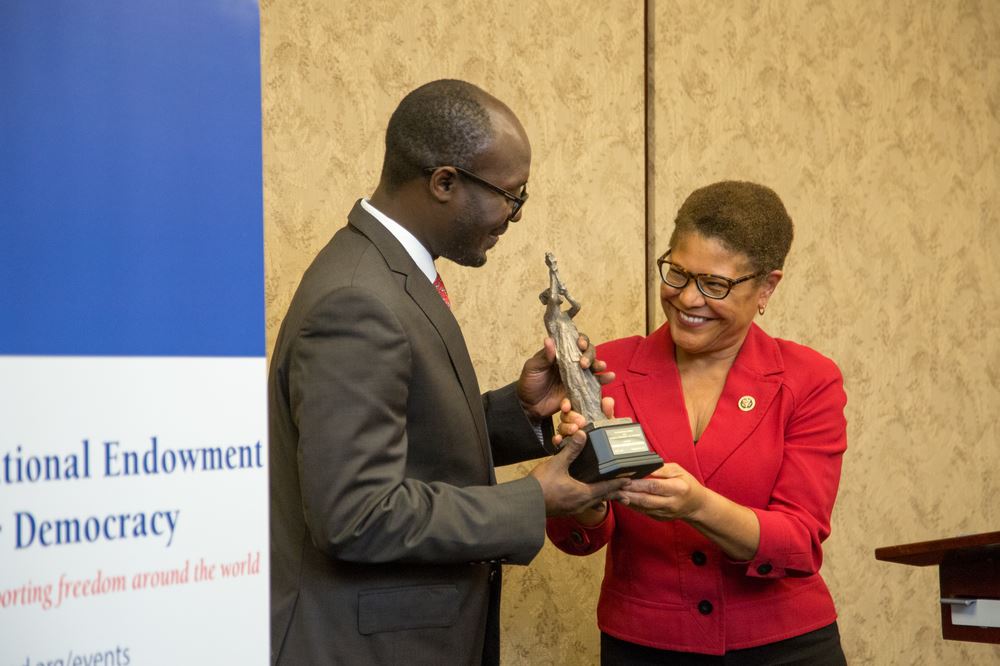 WASHINGTON, DC — The Office of the Attorney General in Angola indicted award-winning investigative journalist Rafael Marques de Morais for “outrage to a body of sovereignty and injury against public authority,” under the Law on Crimes against the State Security.

In an article published on his anti-corruption watchdog website, Maka Angola, Mr. Marques exposed the illegality of Angola’s Attorney General (AG) to act as a property and real estate developer in addition to his legal duties. Mentioning documentary evidence of the land purchase, Mr. Marques contends that the act is in violation of the “Principle of Exclusive Dedication” clause in the Constitution. The article, published on November 3, 2016, also questioned the tolerance of the president, José Eduardo dos Santos, towards his subordinates who openly disobey the constitution.

Mr. Marques was indicted upon his return from Washington, DC, where he was honored, along with four other anti-corruption activists, with the National Endowment for Democracy’s 2017 Democracy Award. “Rafael Marques’ relentless efforts to expose corruption in Angola despite constant harassment and legal and physical threats to himself are exactly why the Endowment chose to honor him,” said NED president Carl Gershman. “We will be following this case closely, and I am sure many others in the media and international community who know and respect Rafael’s important work also be paying close attention,” said Gershman.

Without providing much reasoning, the indictment states that as the publisher of Maka Angola, Mr. Marques is responsible for crimes against the State Security. In addition to the public charges cited above, Mr. Marques is also facing a civil suit from the Attorney General for abuse of freedom of the press, defamation, and injury. Mr. Marques was previously imprisoned for his work in 1999, for calling President Dos Santos a dictator in an article titled The Lipstick of Dictatorship, and released after international advocacy efforts on his behalf.
For more than two decades, Mr. Marques has been a staunch human rights defender as a journalist focused on investigating government corruption and abuses in the diamond industry. In addition to the NED award, which was presented to him in the United States Congress on June 7 by Congresswoman Karen Bass (D-CA), Mr. Marques has earned multiple international awards for his anti-corruption investigative work. This includes the Integrity Award from Transparency International (Germany, 2013), Gerald Loeb Award for International Reporting, UCLA Anderson School of Management (co-winner with Kerry A. Dolan,Forbes, New York, 2014) and the Allard Prize for Integrity from the British Columbia University (Canada, 2015).
# # #