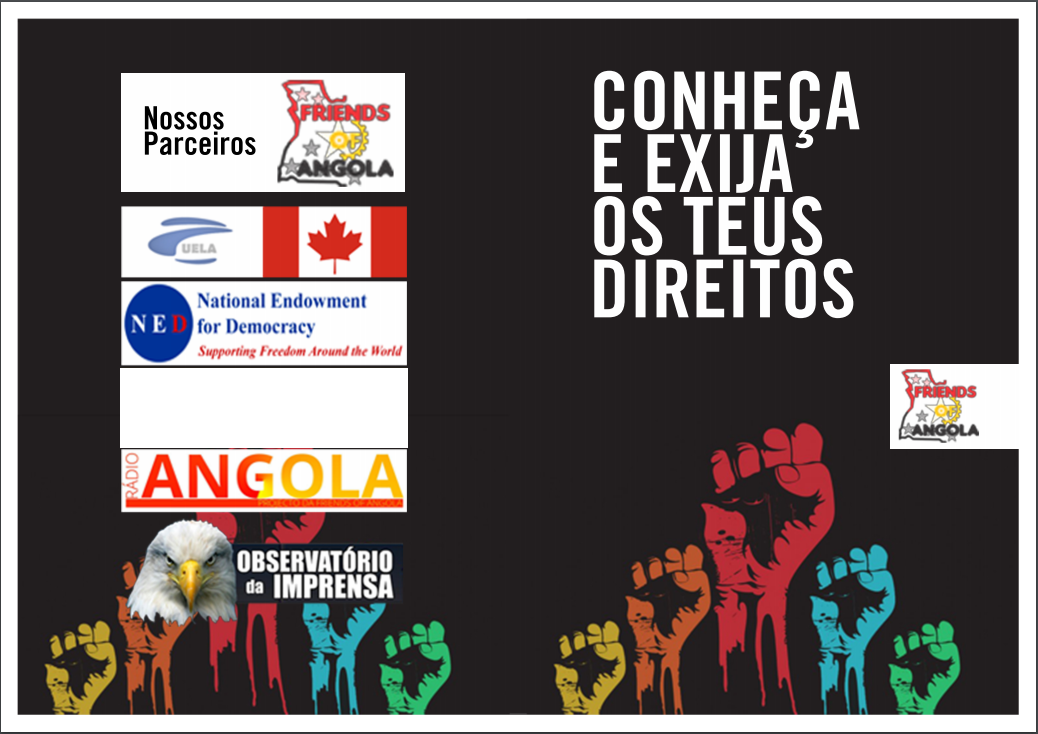 For the age of concrete rights

The Zuela Project, embodies the theme “Know and Demand Your Rights.” This theme was introduced because as an organization, we understand that to train people to use the Zuela application in reporting and defending Human Rights, might involve certain legal precedents and we want to make certain citizens aware of them. For this reason, we have extracted excerpts from the Republic of Angola Constitution

The Zuela Project, embodies the theme “Know and Demand Your Rights.” This theme was introduced because as an organization, we understand that to train people to use the Zuela application in reporting and defending Human Rights, might involve certain legal precedents and we want to make certain citizens aware of them. For this reason, we have extracted excerpts from the Republic of Angola Constitution.

Why do we call it Know and Demand Your Rights? This is because it is not just enough to know individual rights alone to change reality. To achieve this, it is necessary that people are capable of demanding the realization of these rights in a peaceful and non-violent way. Our non-violent civic vision that reports all our activities, also guides the spirit of this initiative.

Civic engagement is a great challenge as it presents minor to medium risks. It is more challenging because it tries to realize everything that is shaped in the personalist political philosophy. That is to go from the theoretical or legal text to reality. In other words, change the text on rights to practical and experiential reality. This is no longer the age of metaphysical philosophical grounds of human rights but rather the age of the creation of public policies to realize such rights, as said by the Italian thinker Norberto Bobbio in “The Age of Rights.”

In this sense, the men and women who have shaped and shall shape history thus influencing people’s lives, are and shall also be those who, with their involvement, seek solutions, share solutions and challenge the ongoing systems that even with human rights embodied in their constitutions, the reality is an absolute opposite, where they unspeakably deny human dignity.

Friends of Angola (FoA) fights for Human Rights and democracy because its members believe that human greatness and its realization is only possible when such rights are respected. However, by reason of deprivation of these rights in the context where we act, we refuse to display the messianic flag, because the salvation of people, the freedom that arises from it and the realization of their triumphs are only worth if it is collective and participatory. Hence, we invite all of you to get to know your rights, so we can fight together for our collective freedom as a nation inside nations.

We fight for rights because we defend democracy. We hope this democracy comes to Angola in the very near future. Why? Because according to the universal ethic consensus, Human Rights are the only valid foundation to acknowledge a country as democratic, alongside the tripartite separation of power.

FoA’s concerns about Angola regarding Human Rights general status and specific aspects i.e. corruption rate, freedom of speech and freedom of the press, economic freedom, right to the internet, among other indicators that make a country an open society, is also shared by international organizations.

Ibrahim Index of Good African Governance in 2017 rates Angola among the 10 countries with the worst rate on the continent. The same organization reaffirms this position on freedom of speech. Regarding economic freedom and bureaucracy of companies in the country, it became worse in the last five years.

According to the Human Development Index (IDH) of 2017, among 168 evaluated, Angola ranks 150 with 0.533 points, which means low and precarious level of life. Beyond statistics and numbers, this means that Angolans suffer serious deprivation of water, sanitation, food, housing, health, etc.

As if this disgraceful status were not enough, Angola is among the six most corrupt countries in new Index of Perception of Corruption of International Transparency. It ranks in 163, a place before South Sudan. Coming behind are Sudan, Afghanistan, North Korea and Somalia.

Freedom House disclosed the 2018 freedom world map. This map places Angola in the geography of countries without freedom. In the analogous period, Human Rights Watch disclosed another report/analysis describing the current political culture – of the succession period – as similar to the old president, regardless of the incomprehensible surge of hope in the country for having a new head in the executive power.

This bleak picture that degrades the unarmed eye every day poses challenges for all Angolans. We need to know our rights and demand their implementation simultaneously in all sectors so that the universality and complementarity of rights can be translated into our Collective Right to Development.

Read “Know and Demand Your Rights” in full here.